The treatment of patients with the musculoskeletal system pathologies. The fundamentals of the method

The main method of treatment for the patients suffering from musculoskeletal system pathologies used in the Institute of Clinical Rehabilitology is a unique surgical technique - phased (step-by-step) fibrotomia (PFT) which was invented and put into practice by PhD Professor V.B. Ulzibat.

The essence of the phased fibrotomia lies in a special method of discussion of the muscles pathologically changed areas (scars) by a specially designed scalpel, which allows avoiding large skin and healthy muscles discussions and is aimed at elimination of local muscular contractures and pain syndrome with minimum possible discomfort for the patient. Such surgeries leave no scars on the patient’s body, but only punctures after the scalpel insertion. The surgery is performed in the quickest and safest possible way for the patient, which minimizes the time of being anesthetized and, most significantly for the children, the stress. 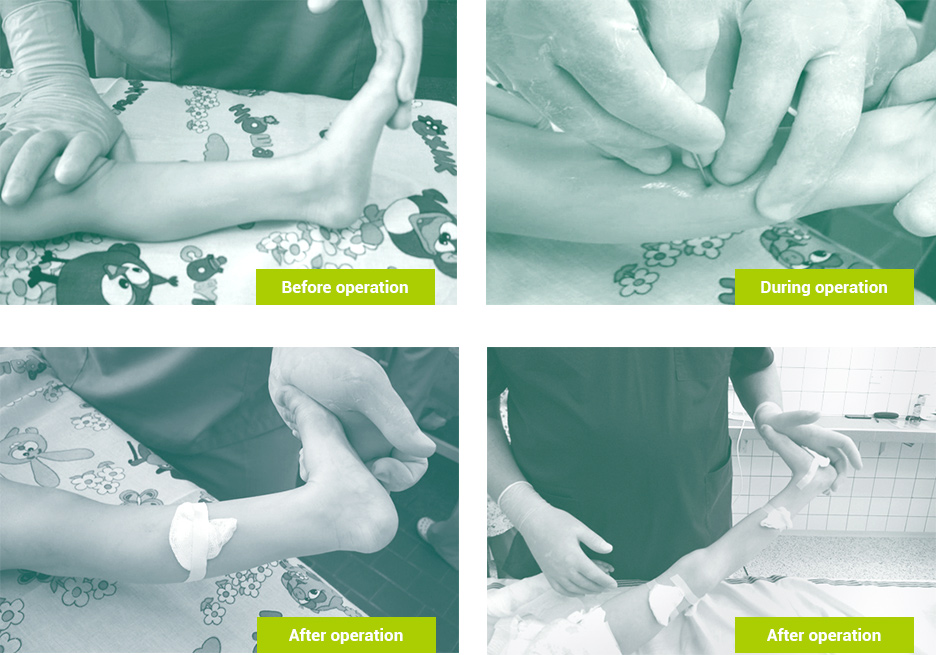 Besides, the advantages of phased fibrotomia (PFT) in comparison with the other surgical methods of treatment on skeletal muscles are:

As distinguished from classical surgery techniques (subdermal myotomy, tenomyotomy) and their variations, the phased fibrotomia is performed with a reduced impact, without skin discussions, only in the in the scar area in a healthy muscle sparing way. No complete muscle incision or work operation on tendons or bones is performed. After surgery no plastering should be made. The surgical wounds are easy to take care of for every patient

our method allows performing surgeries on any superficial muscle; such technique is used for different musculoskeletal system diseases due to development of similar changes in muscular tissues under the influence of different causative factors (trauma, infections, allergens, toxins, etc.)

Short time of the surgery

no need of using auxiliary complex equipment and additional procedures in the process of the surgery resulting in significant increasing of the surgery time and the patient’s being anesthetized which eases the patient’s postanesthetic state and decreases greatly possibility of post-surgery complications;

There are no contraindications related to early age of the patients and to concomitant hyperkinetic, convulsive, hydrocephalic, asthenic syndromes, to mental and physical retardation, compensated chronic diseases and congenital anomalies (hydrocephalus, heart disease, stridor, etc.).

The infantile cerebral paralysis treatment has several stages. On each stage we debride the necessary amount of muscular and fascial contractures at a time under general anesthesia, the number of PFT performed under local anesthesia varies from 4 to 6 per each stage. On each stage we come to agreement with a patient or his representative (a parent) about the surgery plan and execute the relevant documents.

The time of the next surgery stage depends upon the movement disorders complexity, on the presence of associated diseases and on the development rate (for children).

Due to low possibility of injury, postoperative recovery of motion functions shortens significantly – from 5-7 days to 3-4 weeks (depending on the gravity of the surgery).

The removal of muscular contractures and pain syndrome enables substantial increase of the range of motions. It helps to receive new motion skills and to improve the existing ones. The increase of the overall motion activity stimulates mental development, broadens the scope of interests, betters self-service skills. In difficult cases, it makes the nursing considerably easier.

We work all over the world

At the average we operate 3500 patients annually. 86,6% of all the clients are the children suffering from ICP. Among all the operated 79,8% are the people with spastic tetraparesis and with spastic diplegia. 94% of patients have mean and advanced degrees of motion disorders.

The afterhistory analysis made by independent medical experts from different cities of Russia and by the institute staff shows that we can see the constant improvement in the general clinical performance. The increased range of motions, the onset of new movement skills and the improvement of existing ones were considered to be the cure rate. In the definite period of treatment 10 – 18% of patients had no substantial changes, 1 – 3% suffered from pain on the muscle zones which hadn’t been operated on before. This medical phenomenon was considered to be the deterioration. The changes connected with pain were temporary and were eliminated on the following stages of treatment. In accordance with pain and muscle contracture localization the effectiveness of phased fibrotomia was 97,5%.

Furthermore we notice supplementary positive effects such as: the improvement of speech, mastication, swallowing, emotional and behavioral indexes, memory, attention, sleep, appetite, the decrease of strabismus, nystagmus and salivation, the improvement of visual and hearing acuity, the normalization of urination and defecation.

Having observed the patients during 24 years, we can confirm that the optimum time for the operation is the stage of the early muscle contractures onset before the occurrence of persistent contractures and joints deformations. In this connection it’s highly advisable if you wish to get positive permanent results quickly with minimum number of operations, you should begin the surgical treatment in the early age (from 3 to 5 years).

The following indications to treatment according to V.B. Ulzibat’s technique are determined:

The following can be considered absolute contraindications to surgery:

The following can be considered absolute relative contraindications to surgery: