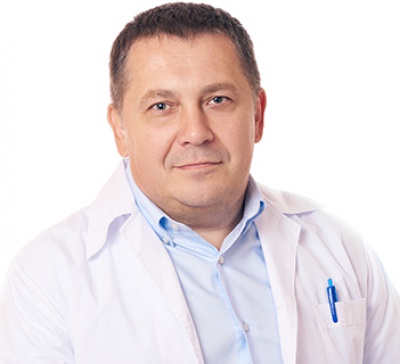 Repetunov Alexej Alexejevich was born on the 31st of January, 1972 in Arkalyk Republic Kazakhstan.

In 1998 he graduated from Karaganda State Medical Institute by the speciality Medical Business.

Since 1999 Alexej Alexejevich has been working in ZAO “Institute of Clinical Rehabilitation”.

During the period of 1.09.2007 – 31.07.2008 he took the internship on the basis of "The Institute of Clinical Rehabilitation" by the speciality Traumatology and Orthopedics. The professional certificate on Traumatology – Orthopedics was issued by the Mechnikov State Medical Academy in Saint Petersburg.

For the work period in ZAO "The Institute of Clinical Rehabilitation" Alexej Alexejevich has the reputation as the competent and firm of purpose specialist, who is well informed about the surgical treatment methodologies.

He is an active participant of the institute research work. Alexej Alexejevich successfully applies the modern medical technologies. He is a competent specialist. The doctor is constantly mastering his skills by studying the recent advances in medical science.

Alexej Alexejevich is a practitioner. He is very responsive to the patients. The doctor enjoys authority over the medical staff.